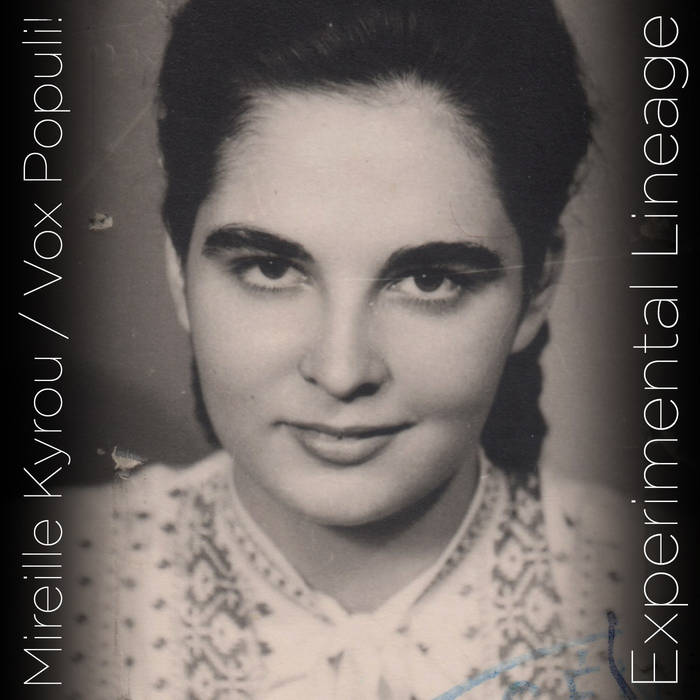 " This release is composed of the only two recorded works by musique concrète pioneer Mireille Kyrou (1931-2017), and of ‘Koro Wild’, played and composed by her son Axel Kyrou, main member of Vox Populi!

Mireille Kyrou was born in September of 1931 in the town of Cairo. Her mother was French and her father was part of a family that migrated from Palestine to Egypt.
She studied piano from an early age and was sent in 1955 to Paris to complete her musical learning.
She studied harmony with the famous French composer Olivier Messiaen for two years, before joining the GRM (Groupe de Recherche Musicale) in 1958, the experimental music research center which had just been created by Pierre Schaeffer, the inventor of musique concrète some ten years before.
There, the working time was divided in two. Working on her own music, using the top-notch equipment available there, while trying to create the equivalent of the classical musical notation for musique concrète. If this new music had the ambition of becoming the new classical music, it had to be writable and reproductible, as much as the ‘old’ one. The results were to be found in Pierre Schaeffer’s main book, Le traité des objets musicaux, released in 1966, though it eventually ended as a failure, as history confirmed.
She quit the GRM in 1961 to devote herself to family life, raising two sons, Ariel, born in 1962, and Axel, born in 1964. She married Ado Kyrou, a Greek film director and writer, very close to the surrealist group of the 50s and early 60s. He’s mostly known for his book Le surréalisme au cinéma, which was translated in several languages.

The only available recorded track by Mireille Kyrou is ‘Etude 1’, released on the mythical album from 1964, ‘Musique Concrète’, edited by Philips, also featuring music from giants of musique concrète, such as Pierre Schaeffer, Iannis Xenakis, or Luc Ferrari. The main sound sources for this track were a comb and a feather.

The second track featured here, ‘Film Musique’, is unreleased, and recorded in the same environment and historical period as ‘Etude 1’. It is the soundtrack of an experimental film, which nothing seems to be known about. Although Mireille thought that the track wasn’t supposed to be listened without the film, she eventually agreed to release it.

Mireille had a peculiar love for the Vox Populi! track called ‘Koro Wild’ and insisted that it would be played at her funeral. It proved to be a strong experience, felt by all friends and members of the family attending the ceremony.
‘Koro Wild’ was recorded over a long period, 1994 to 2007, in France, Japan and Burkina Faso. All field recordings and instruments done and played by Axel Kyrou. First released on taâlem. "